A tale of two Karoo pastors

Among the many friends that Stefan and Erika Cramer have made during their anti-fracking work in the Karoo are two faith leaders from very different backgrounds.  In spite of their differences both pastors describe the place that the Karoo has in their hearts and in their lives with remarkably similar words. For them, the Karoo is more than just a special landscape.  It is a particular lifestyle: simple, warm, almost elementary.  `She’ provides healing, peace and upliftment.

What makes it possible, wondered Stefan, for two people with such vastly dissimilar histories to work in parallel in their communities?  Both are building bridges by growing pride in the Karoo and understanding about the need to protect it from negative impacts including those of fracking.  Until they were introduced by Stefan the two pastors did not know that they shared similar goals.  What lessons – not only for the Karoo – can be learnt from such a partnership?

Stefan interviewed the two on a crisp winter day in Graaff-Reinet. 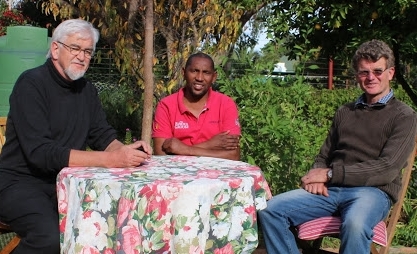 (Seated from L to R of Dr Stefan Cramer, Neville van Rooy & Charl du Toit )  The following text is based on excerpts from a taped three hour conversation.

Charl du Toit, a dominee in the Dutch Reformed Churchand the older of the two pastors, grew up in a big city with apartheid privileges.  He followed an academic path and served his deeply divided congregations by trying to heal the divisions.  After a personal tragedy and setbacks he chose to focus on sharing his love of music and moved with his family to Nieu Bethesda to be closer to the healing that nature offers.

Neville van Rooy, grew up in a small Karoo town, the child of Khoisan and Xhosa parents. He was sent to Cape Town to get a better education and met the Lord on a train while commuting to school. Neville completed his formal education at the Cape Theological Seminary. Then in response to his love for nature, he grabbed an opportunity to participate in game reserve training before returning to his home town, Murraysburg, where he works with emerging farmers.

Stefan: “How do you understand and respond to the sometimes violent power relations found in small Karoo dorpies?”

Charl: Although things have changed significantly since the new dispensation, we sometimes regress to old habits. When the superiority versus inferiority complexes manifest themselves, real conversations about important issues become difficult. We must return to openness and honesty to resolve our conflicts. It is the only way to overcome the experiences of marginalization and helplessness that people have.

Neville: Let me respond from the perspective of indigenous communities. It is our firm belief that the earth has never impoverished its people. We can only care for the Karoo if we share its gifts equitably. I am heart-sore when I see the /Xam reference in the South African Coat of Arms, which is not reflected in reality. Without access to land, we, the first people, cannot truly express ourselves.

Charl: Fracking, for example is only a possibility when people became alienated from the land and stopped caring.  I believe that a lasting solution can only be found through open discussions that allow communities to become equal partners.  In this the church cannot go halfway. Charl leans over to Neville as he says:  “The bottom-line is if I am not prepared to be your brother, I cannot claim to understand the gospel, because the gospel makes you my brother.”

Stefan: So then, what do you think the church’s role should be in an agenda for change?

Neville: I see the church as `peeping’ through the windows of the powers that be and commenting on what is right and wrong. The church must get much more involved. If you don’t get involved you don’t have the right to point fingers.

Charl: Honestly, the churches are struggling with a difficult situation.  As a musician I like the metaphor of a pure song without words but with clues to help interpret the intentions of its creator.  It is a process full of contradictions.  Similarly, as a dominee the struggle to understand shouldn’t stop me from working hard and from being involved in concrete situations on a small scale.  Being prepared to work to really change my environment, to the extent that I can, that gives me incredible hope. Everybody can make a difference.

Stefan: Could fracking bring people who have been divided in the past together?

Charl: “Alliances between all communities who believe not in self-protection but in a future without destruction is essential. We need a convergence of people who care for nature in all its forms.”  Nature itself is an incredible resource in common. Only in reconnecting with nature and each other can we secure a future for our children.

Stefan: Protecting the environment is important for the greater good, not only in an economic or ecological sense, but also for a deepening of spiritual awareness.

Charl: My conclusion would be: What divides us is a huge force! The Bible makes a huge effort to tell us about this dividing force but also that God really cares about how we treat our neighbours. If I become my neighbour’s enemy, I am messing up God’s plan for nature.

Neville: The environment is a connecting point for many religions. We use her and treasure her. We can build stronger relationships with each other across environmental issues.

Carl and Neville: Thank you Stefan for starting this important conversation and inviting us to us talk, reflect, and share.

Stefan: Thanks to you both for your insights and for your commitment to the Karoo. Humankind is so much part of nature that any alienation from her will result in damage and trauma. The Karoo should be a resource, a source of inspiration for all South Africans.