/Xam Quilt tells the story of One Earth

The richly sewn One Earth quilt made by the First People Artists of the Bethesda Arts Centre, Nieu Bethesda beautifully parallels an ancient story from /Xam mythology of light triumphing over darkness with the struggle to stop fracking in the Karoo. The quilt was made in 2014 for SAFCEI as the First People Artists response to what they see as the senseless greed and ruthlessness of fracking the Karoo. The ancient /Xam story used in the One Earth quilt was told to two linguists in the nineteenth Century by the Shaman //Kabbo. //Kabbo knew that his people would soon be extinct, and wanted to preserve the rich /Xam culture so that the ancient stories could reach future generations “by way of books”. 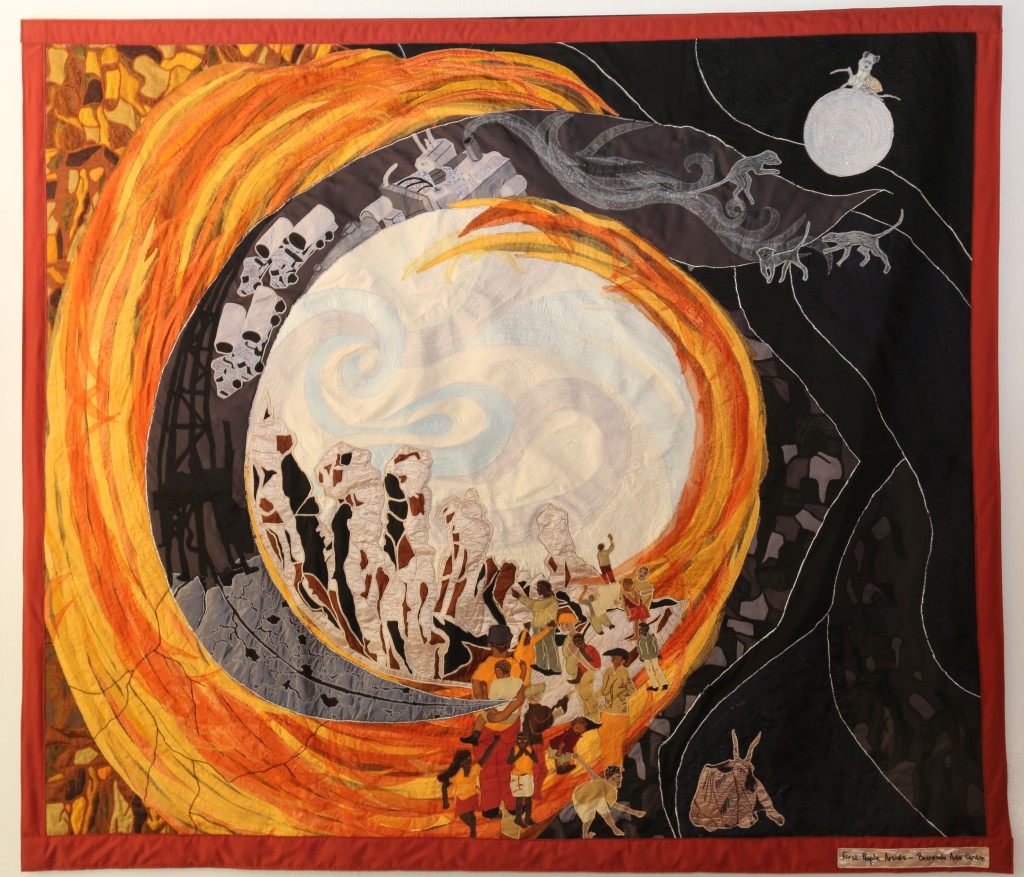 The Mantis, whose name was /Kaggen, was a shape-shifter, a mysterious trickster figure who had power over life and death. From his son‐in-law’s shoe, he created the Eland, most beautiful and largest of Africa’s antelopes. He loved the Eland, and nurtured it in secret till it was fully grown. But the devious Meercats discovered it, and immediately killed it and prepared a feast. The Mantis, broken hearted, tried to fight them, but failed, and in his grief he split open the Eland’s gall bladder that was lying on a bush.  Darkness poured from the gall bladder out over the earth.  Then, in order to see in the dark, he created the moon.

In the centre of the quilt, dolerite columns stand guard, benign protectors of the land, in silent communion with the vast Karoo sky.

For us, the sacred Eland represents life on our precious planet Earth. The Meercats represent those greedy and ruthless forces that drive our consumer society. The Mantis represents that ambiguous power embedded in humanity that creates life, is overwhelmed, creates darkness, and then in that darkness creates light.

All over the world scientists warn of the dangers of wrong strategies being used to find more energy. The cry that the planet is being made uninhabitable for humanity and all other lifeforms is ignored by those hungry to make money from fossil fuels, whatever the cost.  They are like the Meercats in our /Xam story, who care nothing for the beautiful, sacred, innocent Eland, and care only about instant gratification of their desires.

But there are forces that oppose them. There are people who say no, we will not let you destroy our planet.  In our quilt the giant silver trucks bear down, the drilling rig sinks its poisonous root, and the earth cracks open. But on the other side of this destruction, people rise up, together, with their children, with their open hearts, with their power and with their love, saying no, we will not allow you to destroy this planet our home. And above it all, where the Mantis perches, the ambiguous moon shines down on the earth.

1 The One Earth /Xam Quilt by First People Artists of the Bethesda Arts Centre.

For an update on applications to  frack in the Karoo and good news about Shell pulling out their top gas experts, click the link to read more.