Northern Cape communities shocked that liquid radioactive waste is planned for storage at Vaalputs, without any public consultation

During a workshop with faith leaders in Northern Cape, held by the Southern African Faith Communities’ Environment Institute (SAFCEI) this week, the multi-faith organisation found out liquid radioactive waste, highly toxic waste, is planned to be stored in the Northern Cape as a part of a nuclear energy expansion, and that communities are still not being included in decisions regarding radioactive waste dumping located in the province. The Vaalputs nuclear solid waste dump was established during apartheid and will need to expand and include the much more toxic and harder to contain liquid radioactive waste, should Eskom’s application to extend the lifespan of Koeberg nuclear power plant be approved.

SAFCEI’s Energy and Climate Justice Coordinator and youth activist, Khulekani Magwaza – on the road in the Northern Cape – says, “It is critical that these communities, who will be disproportionately affected by pervading climate and energy injustices, are not forgotten. Most significant for them is the issue of nuclear waste being dumped at Vaalputs, which affects several Northern Cape communities, including Springbok, Okiep and Kommagas. Eskom is planning to extend the lifespan of the Koeberg power plant beyond 2024and there has been no meaningful public engagement on their plans despite it being under two years away.”

Communities are particularly concerned about the health and safety implications of the Vaalputs site, which is only equipped to deal with low-level solid radioactive waste, and now is going to be required to store the high-level liquid waste from Koeberg. According to faith leaders in the area, these are proposals that must be discussed in-depth and in vivid detail with all those who will be affected.

“Communities are painfully under-informed and certainly do not feel that they have been involved in any decisions to increase the risks of radioactive leaks and accidents at the nuclear waste dumpsite. This not only means that nuclear waste will continue to be dumped here for longer than initially intended but it will now be a lot more dangerous with greater risks of contamination. When considering the devastation from past mining, these communities are not getting the opportunity to decide how they want their area to be developed,” says Magwaza.

He says, “The issues faced by these communities will worsen and go on to affect the next generations that will inhabit this part of the country. This intergenerational unfairness, where the youth and the unborn, who had absolutely no say in the matter, will bear the brunt. We call for the government to come to the communities and listen to the needs and concerns of the people. This is why we are here, to create a platform for the people to raise their concerns and for them to be heard.”

SAFCEI’s Faith Leader Liaison, Reverend Berry Behr says that it was quite appropriate that they chose to make the trip out to the Northern Cape during Human Rights Month, since here you will find some of the worst violations from government and the mining industry. She says, “The people of Namaqualand have been consistently completely side-lined in the conversation about nuclear waste storage in their province, even though they have valid questions and concerns and a constitutional right to voice them and to receive clear answers.”

Behr says, “These are also the holders of ancient indigenous knowledge, people whose relationship with their land has been torn apart by the commercialism, exploitation and greed of a system that does not accommodate them. As a nation, we acknowledge the need to discuss issues of inclusion but in practice discussions are exclusive, divisive, and elitist. This is not a good recipe for dealing with universally impactful issues such as nuclear waste. It is a travesty of justice that the local people do not know about the Public Safety Information Forum meeting cancellations over the past 2 years, nor did they know about the pending arrival of high-level nuclear waste in their area.”

Andy Pienaar from the Kommagas community in the Northern Cape says, “I particularly want to highlight the situation at Vaalputs, which is a big slap in the face for our community. About two weeks ago, the Nuclear Energy Corporation of SA (NECSA) told the world that the people of Namaqualand and Kammiesberg, welcome the increase of radioactive waste, which we believe will now also include high-level radioactive waste to be stored in our region. This is a blatant lie. For two years now, the Vaalputs Public Safety Information Forum has held no meetings with communities to discuss any safety issues, much less to discuss the possibility of increasing the facility’s capacity and that it will now include even more dangerous materials.”

Lynncey Fredericks says, “Our community suffers so much poverty and entire families, from grandparents to the grandchildren are unemployed. Should helping us not be first on government’s list, rather than bringing more dangerous radioactive nuclear waste to our region? Our concern is that, by increasing this dangerous nuclear waste, it will affect our opportunities in the region. This is why we are grateful that SAFCEI is working with us, that they recognise the need in our communities, and we hope that we can grow in this partnership. We need the women and youth in our communities to be empowered with knowledge of how to fight for our rights to live in a safe and healthy environment.”

According to SAFCEI’s Executive Director Francesca de Gasparis, “The nuclear energy space continues to be marred by what seems to be a lot of ambition by parts of our government for more nuclear energy, coupled with a severe lack of transparency and misinformation. This week, it was found that someone cut the wrong valve on the wrong one of two nuclear units which could have had “devastating consequences.” While it has also been reported that the DMRE is proposing to ringfence “income” from the nuclear energy from Koeberg for more nuclear investment, rather than trying to reduce consumers’ already unaffordable electricity bills and the huge debt at Eskom and ignoring the global trend away from nuclear energy as too risky, too costly, and unnecessary.”

Two weeks ago, it was revealed that Koeberg was not prepared for the replacement of its steam generators, which once removed, are highly radioactive and require very specific safe storage conditions. News reports also revealed that the French specialists who flew out to do the work had to return home, since the necessary safety requirements were not in place. Interestingly, however, at the same time the pro-nuclear lobby consisting of NECSA, the DMRE and the National Nuclear Regulator all continue to claim that all is well at the plant. This type of unacceptable human error is one of the key reasons SAFCEI is against nuclear energy because it only takes a small mistake to wreak mass destruction. We must remember that both the Chernobyl and Fukushima disasters were exacerbated by human error.

Coupled with the lack of transparency and misinformation with the “blatant lies” from NECSA, as highlighted by communities in Northern Cape, we must also once again reiterate the urgent need for a community representative on the NNR Board. This very important position is once again vacant, following the removal of Peter Becker by the Minister of Energy in January 2022, just a day before the decision was taken to replace the steam generators. The safety risks and wasteful expenditure at Koeberg are why we have been calling for more transparency and oversight on the country’s nuclear power plant. With nuclear energy, there is no room for error.

SAFCEI’s Faith Leader Liaison, Reverend Berry Behr says that it was quite appropriate that they chose to make the trip out to the Northern Cape during Human Rights Month, since here you will find some of the worst violations from government and the mining industry. 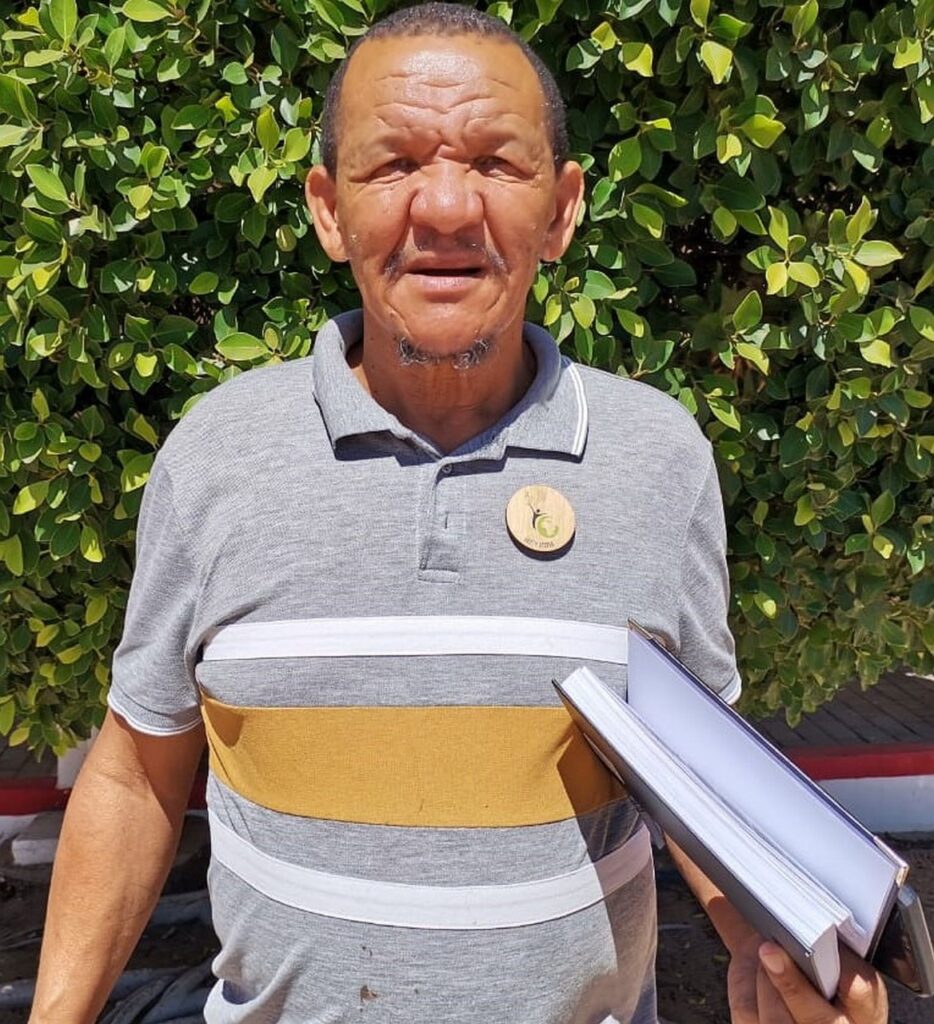 Andy Pienaar from the Kommagas community in Northern Cape says that the situation at the Vaalputs nuclear solid waste dump, which was established without any public consultation during apartheid, is a big slap in the face for local communities.

Lynncey Fredericks from Northern Cape is concerned about the negative impacts of having more dangerous radioactive nuclear waste sent to a region already gripped with poverty and unemployment.